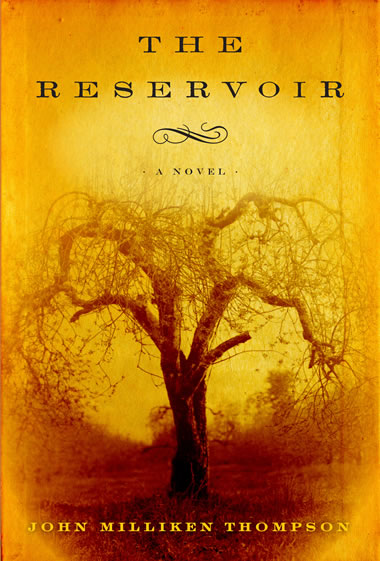 “Southern Gothic gets a new twist in this true-life novel of crime and punishment in the heart of the fallen Confederacy. John Milliken Thompson stumbled upon a real-life case of long ago, re-created its world, and crafted a gripping tale. From the poignant puzzle brilliantly set out on the opening pages, The Reservoir plunges ever deeper into hidden depths of guilt and passion.”

Henry Wiencek, author of An Imperfect God: George Washington, His Slaves, and the Creation of America

“an intoxicating tale of loyalty, betrayal and the enduring vagaries of the human heart”

“It is the way people think and feel that creates the plot for this book … the characters are absolutely right from start to finish.”

Joanne Greenberg, author of I Never Promised You a Rose Garden

“A novel based on a true story that incorporates a bit of history and a touch of the Southern Gothic tradition … [Thompson] writes compellingly about the bond between Willie and Tommie, and his portrayal of the social mores of the post-Civil War South is believable … an engaging mystery novel.”

“In The Reservoir, John Thompson has created historical fiction of the very highest quality: vivid in its period details, gripping in its drama. It’s a novel of the South that tells the reader that there is more to the culture, more to the history, than the Civil War.”

“. . . both an exciting and lyrical read–I couldn’t put it down–and raises interesting questions about guilt and justice and family bonds.”

“Thompson . . . fleshes out the bones of an actual 1885 murder case in his solidly entertaining first novel.”

“I couldn’t put this book down. The story, based on real events in 1883, is the murder of Lillie, who was eight months pregnant when she was found floating face up in Richmond, VA’s drinking water reservoir. Was it an accident, suicide or something more sinister? The author really captured the feeling of the time, but it was difficult to imagine that so many of the police proceedings and trial rulings are totally different from ours of today.”

“This book defies categorization.  What begins as a mystery steadily becomes a study of one foolish young man’s inevitable meeting with his destiny.  Not much is likable about the main character as we come to know him in his youth; yet somehow, through the course of this cinematically portrayed novel, I was moved by him and cared about him. By the end, the reader is observing Everyman; the human condition just is–and redemption is possible.”

“Gorgeously suffused with the feel of 1880s Virginia, The Reservoir is not a whodunit but, even better, a did-he-do-it… John Milliken Thompson’s debut is an all-too-human and unforgettable puzzle, rendered in haunting shades of gray.”

“In this compelling novel, this superb writer instructs and enchants.”

“[Thompson] does an outstanding job . . . This book will entertain readers with the quality of its writing, its true and intricate details of 1885 Richmond and its tale of . . . American tragedy.”

“Thompson masterfully illustrates how a seemingly clear-cut case can be filled with ambiguities.”

“Fans of courtroom drama, historical mysteries, and Southern gothic are sure to enjoy the tale which, even once the book is finished, will keep readers wondering about what happened at the reservoir.”

“Pitch-perfect to the post-Civil War era . . . This is an impressive first novel  . . . hurtling toward greatness as an artful vehicle for grappling with temptations and the ambiguities of guilt. . . . The Reservoir gets stronger and richer as it rolls toward its startling climax.”

BASED ON A TRUE STORY

“The way it floats in the water so serenely in the moonlight and the sunlight you would have thought it was meant to be there. Pure and unyielding and as solid as silk. She floats there, a mystery as deep as the moon and the mind of God. What does it mean? A pregnant girl floating in the city’s drinking water?”

On an early spring morning in Richmond, Virginia, in the year 1885, a young woman is found floating in the city reservoir. It appears that she has committed suicide, but there are curious clues at the scene that suggest foul play. As the identity of the girl, Lillie, is revealed, her dark family history comes to light, and the investigation focuses on her tumultuous affair with a cousin, Tommie Cluverius. Tommie, an ambitious young lawyer, is the polar opposite of his brother Willie, a quiet, humble farmer. Willie must now decide how far to trust Tommie, and whether he ever understood him at all. Told through accumulating revelations, Tommie’s story hurtles toward a riveting courtroom climax with a shocking conclusion.

Get the reading group guide, and more resources for the book.

Excerpt from The Reservoir

On March 14, 1885, a body is floating in the old Marshall Reservoir, in a light snow, and then under a waxing moon.

In the morning the superintendent of the reservoir, Lysander Meade, discovers a furrowed place on the walkway that he does not remember seeing the night before. Someone has crawled through the fence again—early in the year for youngsters to be out cavorting at night. He glances down toward the water and sees what appears to be a dress. It’s floating along the edge of the water, where the embankment slopes down to a picket fence. He’s seen a lot of oddities in his years—rubber condoms and smutty books and the occasional sack of puppies—but never a dress. He tries to imagine the scene. Mighty cold last night for such carryings-on. Except now he sees it isn’t just a dress, but a whole person. A woman. And a dead one at that, or what appears to be. Never has he found a dead woman, nor man neither for that matter.

So down he goes for a better look. Who would not want to see a dead woman? Could she be something to look at? Could she be a fine looking lady, or might she be one of your more common sorts? Mr. Lucas comes up from the pump house where he has been repairing a stopcock, and helps Mr. Meade with his speculations. They stand there together, Lucas a head taller, loose-limbed and slack-jawed, with stick-out ears, while Meade, wearing thick eyeglasses, bends rigidly forward at the waist, his navy jacket stretching across his back, his neat mustaches crinkling as he sniffs the air. All they can make out at first is a gray wool dress with flounces at the bottom and hair hanging like dark weeds about her head. “The grappling hook’s the thing,” Mr. Meade says.

Mr. Lucas comes back presently, hook at the ready. But now Mr. Meade is not so sure. He nudges the body closer to the shore. Then he stops and yells. “Hello, ma’am? Hello, miss? Hello?”

“I expect you’ll have to yell louder than that,” Mr. Lucas suggests.